Learn how to configure Google Cloud with Dotenv Vault in a simple Node.js web app. This tutorial assumes you are already familiar with .env files and know how to sync them.

You can find a complete example repo here.

Create a cloudbuild.yml file in your root folder to set your Google Cloud settings. Add the name, entry point, and arguments for each step you want executed.

To load your Dotenv Vault environment variables at a certain step, add an env item and reference the Substitution variable that will be set in your Google Cloud Build Triggers accordingly.

Keep in mind that Google Cloud Build Substitution variables always start with an underscore, which makes this reference vital for your success. In our case, the cloudbuild.yml should look like this:

Reference the Vault package as early in your index.js code as possible to skip any conflicts that may arise.

Once Vault has finished building, it will provide you with access to its decryption keys, which you can use to interact with protected environment variables with ease.

To retrieve a key, just input npx dotenv-vault keys, followed by your preferred environment, like ci, for example. You can do the same with other environments such as development and production.

The outcome of this will be a long URI being returned. You will immediately recognize it as it always starts with dotenv://:key and ends in ?environment= with the environment you have chosen.

With the decryption key safely in your possession, it is time to navigate to your Google Cloud Build settings via the web interface and hop onto the Triggers section.

Create a new trigger, if you don’t have one yet and under the Configuration section set Type to either Autodetected, if you plan to use the default cloudbuild.yml filename, or Cloud Build configuration file with the appropriate yml filename.

Under the Advanced section you will find Substitution variables where you can list _DOTENV_KEY as the key and the decryption key you obtained earlier as the value field. 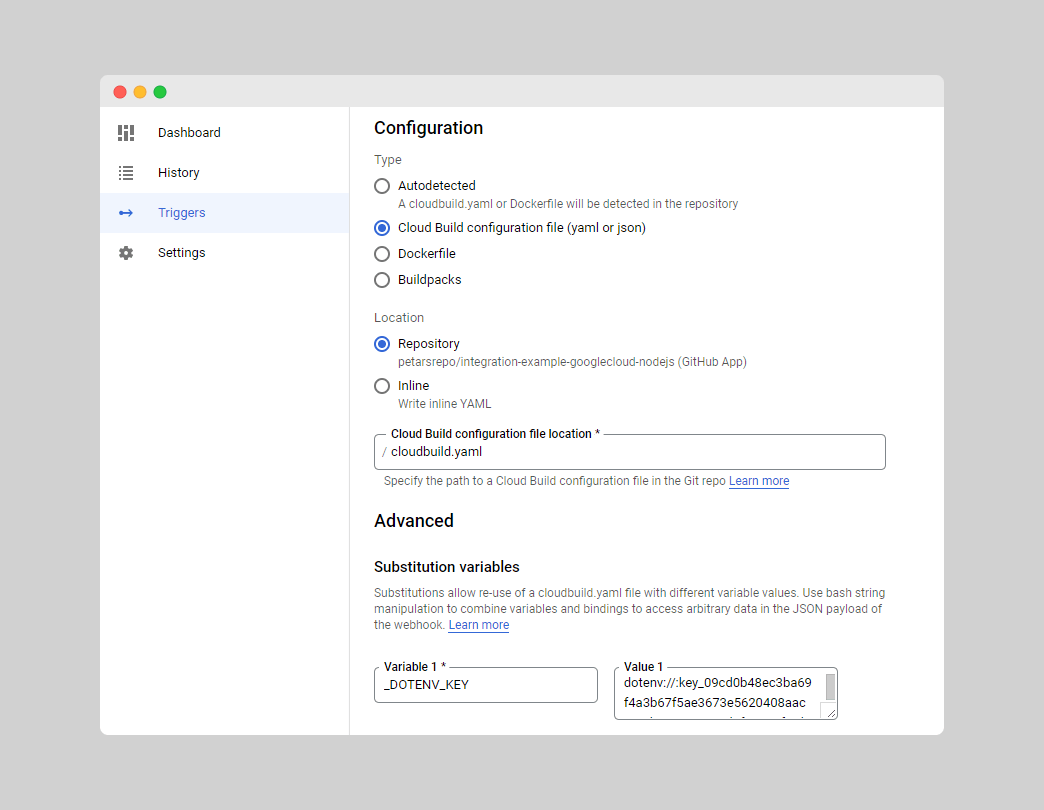 Commit those changes safely to code and deploy to Google Cloud Build.

When the build runs, it will recognize the DOTENV_KEY, decrypt the .env.vault file, and load the ci environment variables to ENV.

If a DOTENV_KEY is not set when developing on local machine, for example, it will fall back to standard Dotenv functionality.