Learn how to make Vercel, Angular, and Dotenv Vault work together in a simple web app. This tutorial assumes you are already familiar with .env files and know how to sync them.

Instantiate a sample application via the Angular CLI, if you don’t have a ready project yet by entering ng new along with your preferred project settings to get started.

You won’t need to make further changes to the codebase to complete this tutorial.

Move forward by installing the dotenv-vault-core package with npm.

Don’t forget to install the @vercel/node runtime, as it offers TypeScript support for the compile and serve functionalities during deployment.

The dotenv-vault-core package allows you to make full use of all Vault capabilities, without the need to commit a single line of code inside your scripts.

Instead, you can preload the package by inserting it within the build and development commands with a simple -r require flag.

This will inject your environment variables before any real rendering is done by Vercel or any other platform. 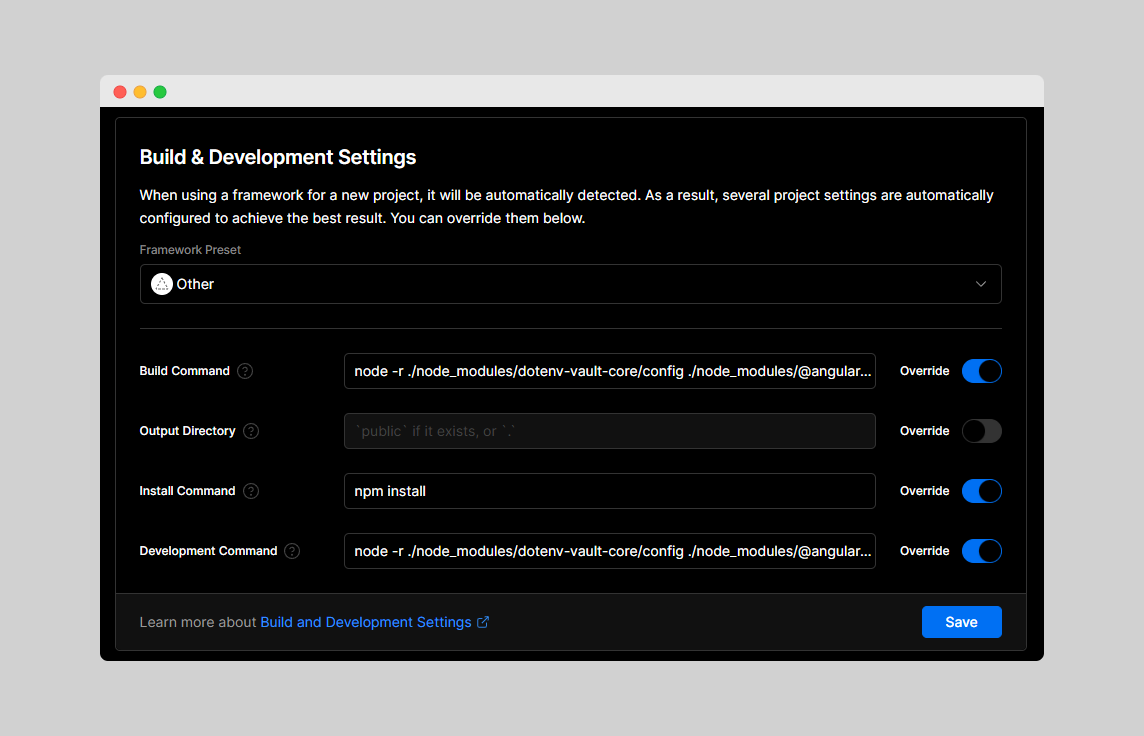 Make sure you are logged in and in sync with your Vault first then run npx dotenv-vault build from CLI in your project root.

This will build an encrypted .env.vault file that serves as a unique identifier for your project in Dotenv.

Inside it you will find the public keys for every environment you have setup and must be committed to source.

With the Vault successfully built, you now can fetch the .env.vault decryption keys for each environment in the Vault project.

Running npx dotenv-vault keys production, for example, will return the production key and so will development and ci respectively.

Now that you have access to the keys for every environment, you will have to reference them as environment variables in your Vercel project’s settings.

To do that, navigate to your Project, then the Settings tab to reach the Environment Variable panel.

Set as key DOTENV_KEY and as value the decryption key returned in the previous step dotenv://:key_1234@dotenv.org/vault/.env.vault?environment=production.

Commit those changes safely to code and deploy to Vercel.

When the build runs, it will recognize the DOTENV_KEY, decrypt the .env.vault file, and load the production environment variables to ENV.

If a DOTENV_KEY is not set when developing on local machine, for example, it will fall back to standard Dotenv functionality.